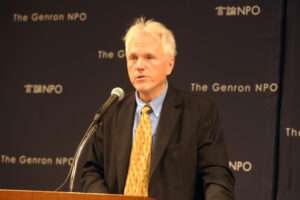 “Good afternoon. It’s a pleasure to join you today. To Mr. Yasushi Kudo, President of the Genron NPO, and to all the organizers, thank you very much for inviting me to provide remarks.

Before I begin, I would like to acknowledge the challenge we are currently facing with the coronavirus, or COVID-19, and briefly touch upon our ongoing collective response to the situation. The U.S. government has been very active protecting the welfare of U.S. citizens in Japan. We extend our thanks to the Government of Japan for its invaluable collaboration, and we remain committed to working alongside Japan and all our international partners to address this unprecedented situation.

The United States has the honor to host the 46th G7 Summit this year. We Americans are practical people and we view our presidency as an opportunity to bring the G7 back-to-basics – to focus on key economic issues that are at the core of the G7.

That means our priority for the Summit will be to emphasize what the G7 was founded to do: stimulate economic growth and promote global prosperity. There is often the temptation to load these meetings with so many issues and topics that it is difficult to know what our priorities are. Again, ours are clear: working together for economic growth and economic prosperity. I’m afraid I will have to keep all of you in suspense about the details, because I am not going to be saying much more than that at this time. I certainly don’t want to get ahead of any White House announcements, which will be coming soon with more detailed information regarding the Leaders’ Summit.

Much of the attention around the G7 is understandably on the Leaders’ Summit but know that preparations are also underway for the Foreign Ministers’ Meeting later this month and the Finance Ministers’ Meeting in April. These are also important gatherings.

Today’s gathering is also important. You have worked to craft recommendations, which I will forward to the White House. It is not so easy to bring together representatives of think tanks from ten nations to develop a document all can agree on or at least live with.

I want to make absolutely clear that the United States remains fully engaged with our international partners, and that we value such engagement. We even value the arguments. We value international rules. This is what has enabled our economies to flourish. At the same time, we expect others to follow international rules as well. And we should not be afraid to modernize these rules

Recently, there has been much talk about the United States and our commitment to the multilateral system, and I wanted to take this time to clarify our position.

In February, Secretary of State Pompeo addressed this very topic during a speech at the Munich Security Conference. He spoke of how in recent years democratic leaders have questioned America’s commitment to multilateralism. He proceeded to give concrete examples of how the United States continues in its traditional role as a global leader.

To name a few: we have worked with our international partners – and importantly our Japanese allies – on global sanctions to prevent North Korea from continuing development of its nuclear weapons program, and we have worked hard to bring Pyongyang back to the negotiating table.

We have raised the alarm on China’s unfair trading practices, the Chinese Communist Party’s aggressive new turn, and its campaign of economic coercion that threatens the sovereignty of developing nations.

We have worked diligently to deprive the Islamic Republic of Iran of diplomatic sanctuary and the financial ability to fuel its campaign of terror.

We are also leading by example on the environment. The International Energy Agency’s latest global emissions report found that America’s energy-related CO2 emissions declined by 2.9 percent in 2019, even while the U.S. economy achieved significant growth. That’s pretty good, I think.

We continue to work with Japan and the European Union on ways to reform the WTO, strengthen existing WTO rules on industrial subsidies and promote the importance of market-oriented conditions for a free, fair, and mutually advantageous trading system.

Then, there are our efforts to advance our shared vision of a Free and Open Indo-Pacific. This involves mobilizing private sector investment in regional infrastructure, which we are pursuing with likeminded allies. Most recently, the United States, Japan, and Australia jointly announced the Blue Dot Network, a branding and certification mechanism aimed at elevating sustainable projects that meet international quality standards.

These are just a few of the signature efforts of the United States working with partners to exercise global leadership. And I ask you: Does this sound like an America that rejects the international community? Are these the actions of an America which has cast off the mantle of global leadership?

Before I wrap up, I would briefly like to touch upon trade. A theme of this conference is “U.S.-China confrontation,” which sounds a little harsh to me. You know, the United States wants a good relationship with China. We all do. And towards that goal the United States is successfully working to achieve a fair and reciprocal trade relationship with China.

In our recently signed Phase One trade deal, the United States and China reached a meaningful and enforceable agreement. The agreement achieves reforms and other changes to China’s economic and trade regime in important areas like intellectual property, technology transfer, and agriculture, among others. Though not all issues were resolved in this round, it was an important step, and there will be more to follow. This is good news, and it is good news for all of China’s trading partners. It is even good news for China.

Let me conclude on that positive note. Thank you once again for inviting me to speak today.