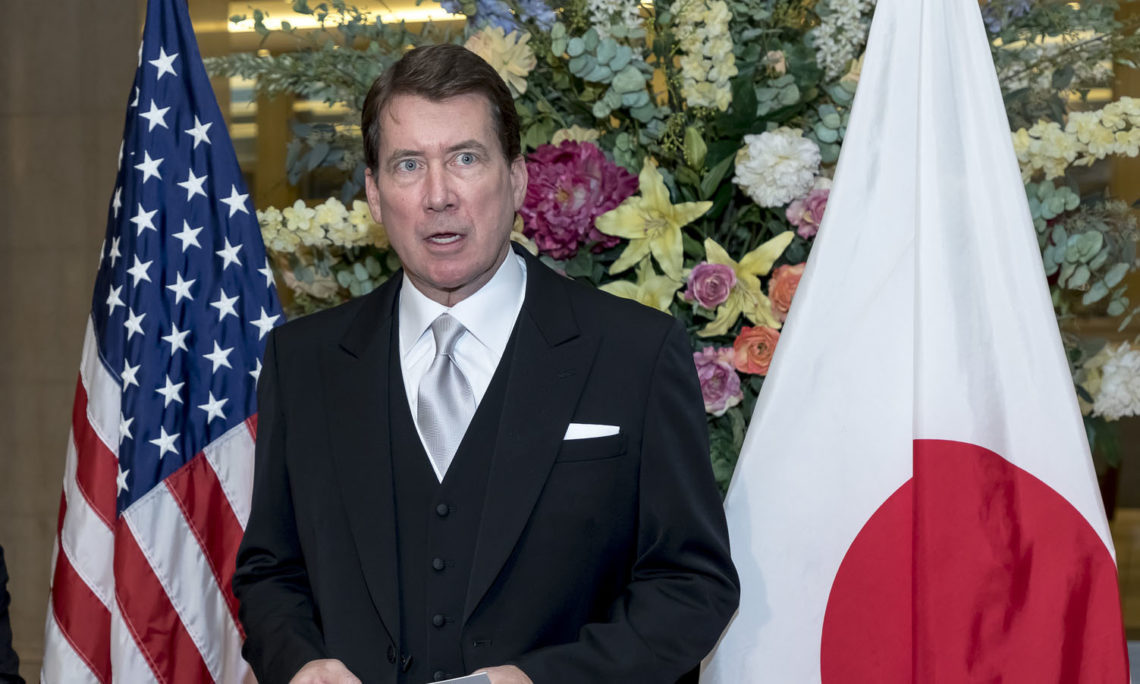 Before I begin my remarks, I would like to say that I extend my heartfelt sympathy to the people of Texas and Louisiana, who are suffering this day, and days prior and days further, with respect to the hurricane and the aftermath of the hurricane.  Many people from Japan have reached out to our Embassy and to me personally to convey their sympathy or their condolences.

Also, people in Japan are reaching out to the folks in Texas and Louisiana to directly offer help and aid.  I want to thank the Japanese companies that are organizing to help us, and the Japanese people whose hearts are with us now. Thank you very much.

I have just returned from the Presentation of Credentials Ceremony at the Imperial Palace.  It was an honor to meet His Majesty the Emperor and to participate in such a special ceremony at that beautiful and historic site.

My family and I have greatly enjoyed Japan’s hospitality since we arrived.  My visit to the Imperial Palace today, however, has been not only one of the highlights of my early tenure in Japan, but also a unique treasure that I will keep for a lifetime.

I bring to the people of Japan the greetings of President Trump. The President and I both share the belief that the importance of our partnership with Japan and the United States could be no greater.  It is the greatest alliance in the world, and I am honored to represent my country as the U.S. Ambassador here.

Our partnership remains the cornerstone of peace, prosperity, and freedom in the Asia-Pacific region. As Ambassador, I will work closely with Japan’s government and people to maintain and strengthen our relationship and deepen our cooperation and friendship.

This honor and responsibility takes on new meaning given recent events.  North Korea’s recent launch of a ballistic missile over Japanese territory is in blatant violation of multiple United Nations Security Council resolutions that reflect the will of the international community. Such actions only serve to further isolate this regime. I can assure you that we stand fully with Japan in the face of this challenge.  Our Alliance is ironclad, and the U.S. commitment to defend Japan through the full range of U.S. military capabilities is unwavering.

Now that my credentials have been accepted, I look forward to getting to know Japan even better and strengthening the wonderful bonds between our two countries.