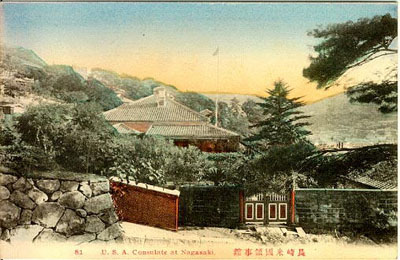 The American Consulate was located in Higashi-yamate during the years 1860-1865 and 1902-1912. (Photo courtesy of the Nagasaki Foreign Settlement Research Group)

By treaty, the United States was authorized to establish a consulate in Nagasaki by the time of the opening of the foreign settlement in July 1859. When U.S. Consul-General Townshend Harris arrived in Nagasaki in late April 1859, a few American merchants had already established themselves in town. At the beginning of May, Harris designated one of these merchants, a New York businessman named John G. Walsh, as U.S. Consul to Nagasaki. Walsh was chosen by Harris out of necessity, since Congress had not yet provided for the appointment of anyone to the post. Walsh established the first U.S. consulate in the Japanese section of the city at Hirobaba. After the building burned down in December 1859, Walsh used his private residence at Higashi-yamate No. 12 as the consulate. Walsh was, for all practical purposes, little more than an acting merchant-consul who was permitted to conduct his own private business while serving as consul without pay. His main duties were to serve as the consular magistrate and to maintain various official records for the U.S. government.

Walsh was replaced as consul in October 1865 by Willie P. Mangum. Three weeks after arriving in Nagasaki, he had a new U.S. consulate built on Minami-yamate. Mangum was replaced as U.S. Consul to Nagasaki by General Alexander C. Jones who took charge of the consulate on July 1, 1881. In 1885 Jones was forced to find another site for the American consulate when the owner sold the Higashi-yamate lot. He eventually rented a lot across town again at No. 14 Minami-yamate, the old Alt house. He served as Consul until October of 1885.

Jones’ successor was John Birch. When Birch arrived in Nagasaki, the old consulate building was being taken over by the British government, so he rented land nearby and built a new American consulate there. William H. Abercrombie arrived in Nagasaki in August 1890 to take over for Birch.

In January 1898, Abercrombie was replaced by Charles B. Harris. In May 1899, all U.S. consular courts in Japan were told to dispose of their cases prior to July 17 when they would lose their jurisdiction in accordance with the U.S.-Japan treaty of November 1894. From January 1899 to December 1901 the American consulate was located on the Oura bund. In January 1902, however, it was moved once again to No.12 Higashi-yamate, where it remained until May 1921. 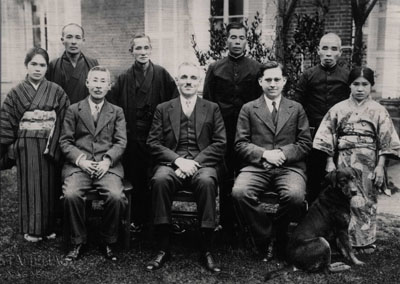 Staff of the American Consulate in Nagasaki (precise date unknown)

Harris’ departure from Nagasaki marked the end of a forty-two year period in which American consuls were chosen primarily because of their political connections. With the reorganization of the U.S. consular system in 1906, the method for selecting consuls was drastically altered. Consuls were chosen from a pool of foreign service officials who had already established themselves through prior diplomatic service – more often than not in Japan.

The first person to be assigned to Nagasaki after the 1906 reforms was George H. Scidmore, a long-time official at the U.S. Consulate at Yokohama. Replacing Scidmore in Nagasaki was Carl F. Deichman, who arrived in Nagasaki in mid-August 1909. E. Carlton Baker followed Deichman as U.S. Consul, arriving in Nagasaki in May 1915 for 18 months.

The next three U.S. Consuls to Nagasaki further reflected the changes in the foreign service that occurred in 1906. All three initially came to Japan as student interpreters between 1907 and 1912 and worked their way up the diplomatic ladder. Thus the consuls that served in Nagasaki after 1916 not only had prior diplomatic service, but some of this service occurred in Japan and they were skilled in the Japanese language.

The first of these was Edwin L. Neville. He was named Consul to Nagasaki in November 1916. Replacing Neville was Raymond S. Curtice, who arrived at the port in March 1920. At the beginning of November 1922, Henry Hitchcock took charge as U.S. Consul in Nagasaki until dying suddenly from a heart attack. Glen Bruner, a local Methodist missionary, was serving as Vice-Consul in Nagasaki at the time of Hitchcock’s death. He operated the consulate there until October 1933, when Carl O. Spamer of Maryland came to assume the office of Consul. Spamer was followed by Edward S. Maney who arrived in February 1937. Maney was replaced by Arthur F. Tower of New York in October after Maney was promoted and assigned to London. Tower remained in Nagasaki until relations between Japan and the United States continued to worsen and Tower was ordered to close the consulate in Nagasaki. Tower left Nagasaki on August 4, 1941and on August 11, assumed charge of the Kobe Consulate. He was still in charge when Pearl Harbor was attacked on December 8 and remained in Japan until the middle of 1942 when he was repatriated back to the United States.