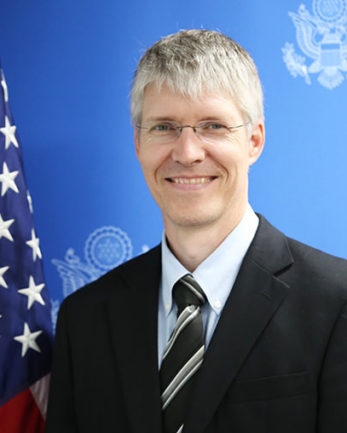 Robert Pickett joined the United States Consulate General in Sapporo in July 2018. He previously served at the US embassies in San Salvador (Consular Section) and Mexico City (International Narcotics and Law Enforcement Section).

Mr. Pickett grew up in Indiana, and earned a BA from Carleton College, in Northfield, Minnesota. Before joining the State Department, Mr. Pickett was a police officer for Sapporo’s sister city of Portland, Oregon.

He first lived in Japan for a short time as a high school student, while his father taught for a year at a Japanese university in Nagoya. Mr. Pickett later studied Japanese language and culture for a semester at Kansai Gaidai University. After graduating, he taught English to Japanese junior high and high school students in Gifu Prefecture for three years.

Mr. Pickett played Ultimate Frisbee for many years until his knees gave out, and now focuses on riding bicycles, eating Japanese food, and soaking in Japanese hot springs. Most importantly, he enjoys exploring Japan with his wife and two young daughters.