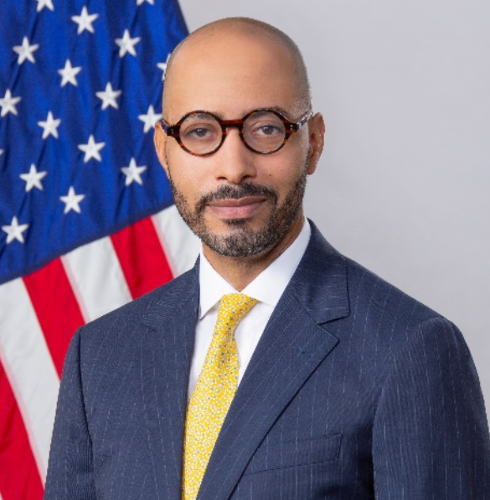 Chuka Asike is a career Foreign Service Officer. Prior to his role as Principal Officer at U.S. Consulate Fukuoka, he held several positions overseas and in Washington DC. Before Japan, he was a Senior Advisor at the U.S. Treasury Department’s Office of Development Results and Accountability, where he focused on multilateral development bank policy and investment projects in Asia and Africa. At the Department of State, he was a Special Assistant to the Assistant Secretary of African Affairs. He also served as a Financial Economist in the Economic Bureau’s Office of Development Finance. In this role, he acted as the Department’s principal liaison to the Asian Development Bank. While in Washington DC, he spent one year at the World Bank’s Office of the U.S. Executive Director as the Department’s representative.

Chuka’s overseas assignments include, serving as the Chief of the Political and Economic Section at U.S. Embassy Luanda, Angola and as an Economic officer in Dubai, UAE and Addis Ababa, Ethiopia. Before joining the Department in 2006, Chuka was a financial analyst at Goldman Sachs in New York in the Global Investment Research division. He was also a graduate fellow at The Cohen Group in Washington DC, where he provided strategic guidance to the firm’s clients on political-economic risk.

Chuka holds a bachelor’s degree in biology with a minor in chemistry from Howard University and has a Master of Science in Foreign Service with a specialization in economics from Georgetown University.  He speaks Portuguese, French, Japanese, and has studied Amharic.  He has lived in Angola, Nigeria, Ethiopia, Kenya, Mali and Dubai, UAE. Calling Washington DC home, Chuka is joined in Japan by his wife Jacqueline, son Issey, and dog. He is an avid soccer and tennis player and enjoys skiing in the winter.