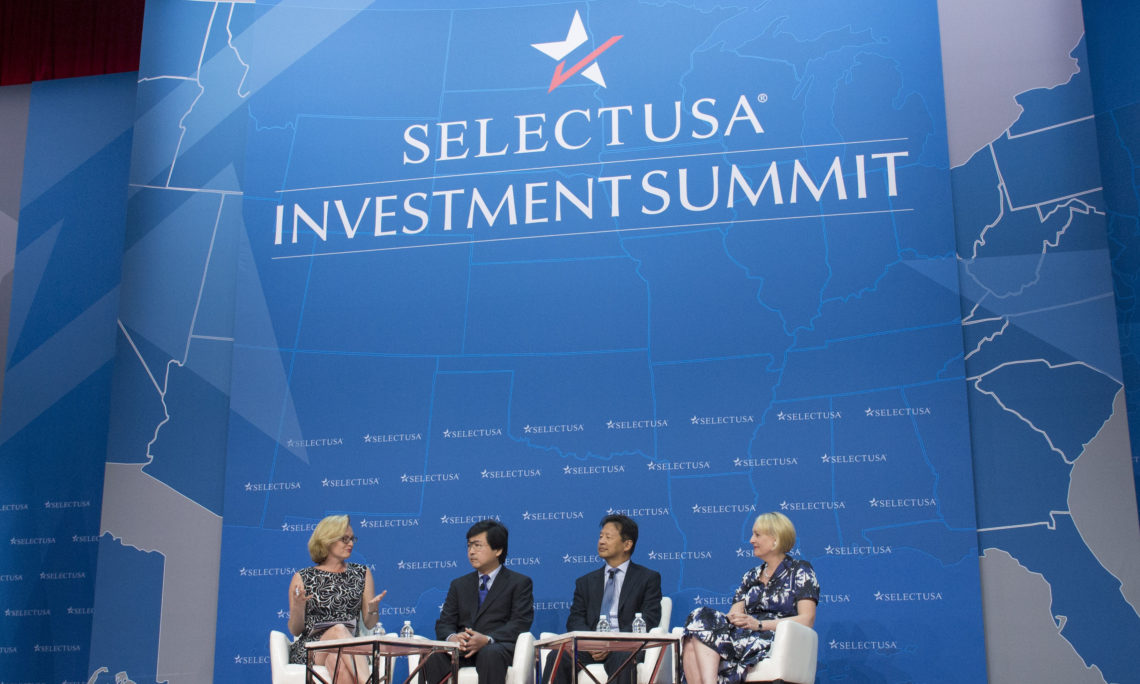 The Department of Commerce concluded its fourth SelectUSA Investment Summit, June 18-20 in Washington, D.C., setting records for total registrations and participating international business representatives. The Japan delegation consisted of 128 delegates from 85 organizations representing a variety of industries across Japan was the third largest delegation following China and Taiwan.

Based on the final numbers, 2017 was the largest Summit to date, with more than 3,000 people registered representing over 1,200 international firms and investors from 64 foreign markets. In addition, there were more than 650 Economic Development Organizations (EDOs) from 51 U.S. states and territories and 26 U.S. Government programs and agencies exhibiting in the US Government pavilion.

The Summit is the highest profile event to connect global companies and U.S. EDOs to facilitate business investment in the United States. “As the nation’s premier FDI event, the Summit brings business opportunities and resources from across the United States together in a single place, enabling participants to complete weeks of work in fewer than three days. We were particularly excited to have Dr. Michimasa Fujino, President and CEO of Honda Aircraft Company as a plenary speaker who shared his journey on why he selected to grow his company in the United States.” noted Chargé Hyland.

“This continues to be the best place for business representatives to find growth opportunities in the United States,” said Secretary of Commerce Wilbur Ross, host of this year’s Summit. “The record number of attendees at this year’s event further shows that the United States is becoming an even stronger investment destination. We look forward to announcing job-creating business transactions that arose from this great event.”

Keith Kirkham, Minister Counselor for Commercial Affairs, U.S. Embassy Tokyo welcomed the largest ever delegation from Japan, a third of whom traveled from Japan, including Tochigi Governor Fukuda and his delegation as well as Mr. Takashi Suzuki, CEO of Sakae Casting Co., Ltd. Mr. Suzuki participated in the last Summit in June 2016 and as a result opened an office in Idaho Falls, Idaho in April 2017.
http://commerce.idaho.gov/press-releases/japan-based-sakae-casting-open-office-idaho-falls/

The highlight for the Japan delegation was the welcoming reception for the Japan, South Korea, and Taiwan delegation members hosted by MGM Resorts International which included a special tour of their state of the art integrated resort, MGM National Harbor Hotel. The Japan delegation concluded the Summit at the reception hosted by Japanese Ambassador to the United States Kenichiro Sasae’s beautiful residence. Secretary of Commerce Wilbur Ross joined to give opening remarks.

The United States is currently home to more foreign direct investment (FDI) than any other country in the world, with a total stock of $3.1 trillion at the end of 2015. Japan is the second largest source of FDI in the United States, with a total stock of $414 billion in 2015. Especially noteworthy is that Japanese investment continues to grow: nearly 10% on a compound basis over the most recent five-year period (2010-2015). U.S. subsidiaries of Japanese firms directly support 840,000 U.S. jobs, contributing $7.9 billion to U. S. research and development, and are accountable for $78.7 billion in U.S. exports of goods, roughly 18.5 % of all goods exports from majority-owned U.S. affiliates. Japan Fact Sheet:
https://www.selectusa.gov/servlet/servlet.FileDownload?file=015t0000000LKSn
https://www.selectusa.gov/servlet/servlet.FileDownload?file=015t0000000LKMu

Mr. Tatsuhiro Shindo, Executive Vice President of Japan External Trade Organization (JETRO) participated in the Summit for a second year in a row. This year, Mr. Shindo was invited to participate in a roundtable discussion on Investment Promotion Agency (IPA) best practices.

Mr. Shindo said, “I am honored to have participated in the SelectUSA Investment Summit two years in a row. I would like to congratulate SelectUSA Executive Director, Fred Volcansek and his staff who are organizing the event on an extremely successful event. I am pleased that I am able to contribute to SelectUSA through the MOI between JETRO and US Commercial Service to promote two-way investment. Japanese investment into the United States tells the deep
history of our two nations. It is not only about trade investment statistics and numbers but there is a deep “kizuna” that both countries have joined hands to promote investment and create jobs. I hope that we are able to reconfirm and strengthen this “kizuna” at the Summit.”

About SelectUSA
Housed within the U.S. Department of Commerce’s International Trade Administration, SelectUSA promotes and facilitates business investment into the United States by coordinating related federal government agencies to serve as a single point of contact for investors. SelectUSA assists U.S. economic development organizations to compete globally for investment by providing information, a platform for international marketing, and high-level advocacy.  SelectUSA also helps investors find the information they need to make decisions; connect to the right people at the local level; navigate the federal regulatory system; and find solutions to issues related to the federal government. For more information, visit www.selectusa.gov.