I would like to thank the distinguished Ukrainian ambassador for joining me today.

It is important for us to show strong U.S. support for the Ukrainian people at this hour, and our strong condemnation of President Putin’s unprovoked, unjustified, and unwarranted war. 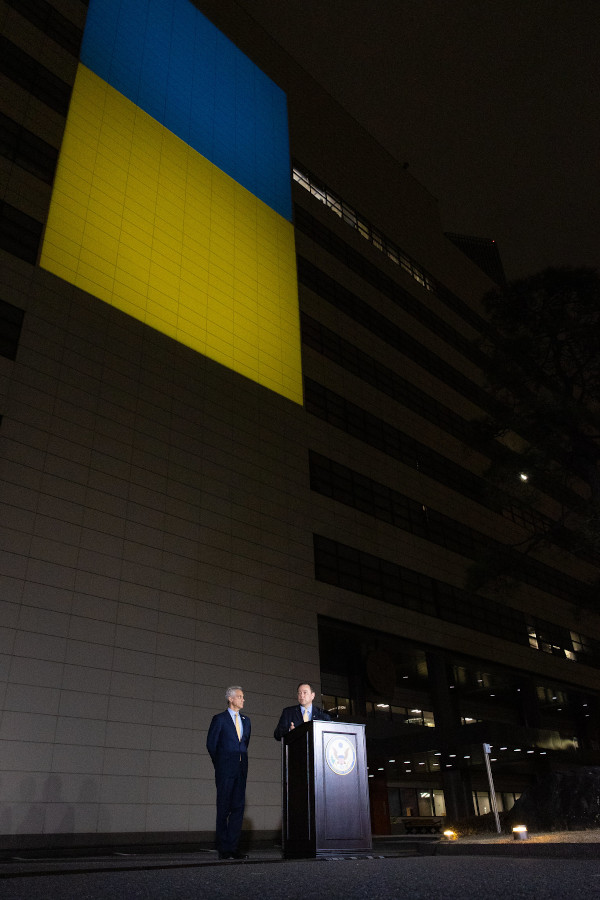 This ground is normally reserved for the colors of red, white, and blue. Now they share a distinguished place with the colors of blue and yellow. It is a new home for those colors.

Foreign embassies here and around the world are displaying the blue and yellow in the same way, marking their walls, their flagpoles, and their lapels.

This moment is especially important for me personally, as both the grandson and the son of family who fled Odessa for Palestine. They left Ukraine, but Ukraine never left them. And when the Ambassador and I met in my residence, we talked about my family’s history in Ukraine.

During his first State of the Union address just hours ago, President Biden used that historic moment – with the world watching his address for the first President since WWII to address the nation in the State of the Union with Europe having a land war – to underscore the United States’ solidarity with Ukraine and the people of Ukraine.

Seated next to the First Lady was the Ukrainian Ambassador to the United States, and the United States Congress’ show of unity in support of Ukraine – from both Democrats and Republicans – reverberated throughout Washington and was seen around the world.

As the President said, we are countering Russia’s lies with the truth, and Russia’s aggression with our resolution. And the free world is holding President Putin accountable. President Putin is more isolated than he has ever been because of his own actions.

Rather than being revered, Russia is now reviled, from sports to culture to finance to commerce, the world is turning away from Russia because Russia turned its back on the world.

The eyes of the world are on President Putin – and also it is on all of us and the ideals and values that we cherish and uphold.

In the streets of Kyiv, Odessa, and Kharkiv, people are defending the values we share and believe in – and they can expect no less from all of us.

We stand up on behalf of our ideals and the civilized world. We cannot – and will not – stand for President Putin’s illegal war.

I would like to extend my sincere thanks to Prime Minister Kishida for Japan’s outstanding leadership in supporting Ukraine and standing up to Russia.

The Prime Minister has implemented swift and strong economic sanctions. Japan made a commitment on LNG support for our European allies and partners, and Japan demonstrated strong leadership in the International Energy Agency to stabilize oil markets. The Prime Minister has made clear to the world that Japan stands against this illegal war – and for our shared democratic values and principles. Because of his actions, it is no longer just a European confrontation but is a global confrontation of democracies against autocracies.

As the President said in his personal letter to the Prime Minister, he greatly appreciates Prime Minister Kishida’s bold and decisive action, and close collaboration. Together, we are standing up against President Putin’s war, and standing up for what we believe in.

The resolve, the resilience, and the resources of the free world will be called upon today, tomorrow, and in the days ahead.

Ambassador: America, Japan, our European allies, and our partners around the world support you and the people of Ukraine today and for as many tomorrows as it takes for Ukraine to be the home of the Ukrainian people. With that, I’d like you to say a few words.