The Fulbright-Mikitani Memorial Grant represents a major step forward for U.S.-Japan educational opportunities. The grant represents both an opportunity to further expand the Fulbright program and study in the United States, as well as a demonstration of binational support for educational exchange and the building of people-to-people relationships upon which the U.S.-Japan partnership is founded.

For the next three years, Mikitani’s generous donation will support 5-6 Japanese students annually to pursue Master’s and Ph.D. degrees, in a variety of fields in the social science and humanities, at U.S. educational institutions through the Fulbright program, the U.S. government’s flagship international exchange program. Japanese students of all backgrounds are encouraged to apply to gain a valuable international perspective through studying abroad in the United States. Like all Fulbright grants, the Fulbright-Mikitani Memorial Grant will be awarded through an open and merit-based selection process.

In announcing his financial support, Mickey Mikitani, Rakuten, Inc. Chairman and CEO, commented, “Study abroad and the United States’ culture of innovation and academic excellence has had an enormous impact on my own life. My father was among the first generation of Japanese Fulbright Scholars to the U.S., and his experience studying economics at Harvard University and later teaching at Yale University left an indelible impression on my own life. It influenced my decision to study abroad and earn my MBA at Harvard Business School. I am very excited to partner with the prestigious Fulbright program to open doors for Japan’s leaders of tomorrow to gain an international education and global perspective through the Fulbright-Mikitani Memorial Grant.”

U.S. Embassy Chargé d’Affaires Joseph Young noted, “The Fulbright program offers an incredible opportunity for Japanese to travel, study, and learn in the United States. Recipients of the Fulbright-Mikitani Memorial Grant will join thousands of Japanese Fulbright scholars who have made important and lasting contributions in their respective fields, and in so doing, continue to deepen and strengthen the U.S.-Japan relationship. I am both delighted and proud to be part of this celebration today.”

The Fulbright program is a scholarship program with an international reputation built on the principles of binational governance, autonomy, and open competition based on individual merit without regard to the individual’s institutional affiliation, geographical location, race, color or creed. The program’s objective is not only to enable the recipient to pursue a particular field of study but to develop leaders who can contribute to promoting mutual understanding between the United States and Japan. For more information, please visit the Japan-U.S. Educational Commission’s webpage.

Mickey Mikitani is the founder, chairman and CEO of Rakuten, Inc. Founded in Japan in 1997 with the mission to contribute to society by creating value through innovation and entrepreneurship, Rakuten has grown to become one of the world’s leading internet services companies.

Rakuten has a dynamic ecosystem of more than 70 services, spanning e-commerce, fintech, digital content and communications, bringing the joy of discovery to more than 1.4 billion members around the world. Rakuten also became Japan’s newest mobile network operator in 2019.

Born in Kobe, Mikitani was educated at Hitotsubashi University in Tokyo, began his career in investment banking, and earned his MBA at Harvard Business School. In 2012, he was awarded the HBS Alumni Achievement Award, one of the school’s highest honors.

In 2011, he was appointed Chairman of the Tokyo Philharmonic Orchestra. He also serves as Representative Director of the Japan Association of New Economy (JANE).

In 2016, he was appointed Chairman and Director of Rakuten Medical, Inc. (formerly Aspyrian Therapeutics, Inc.), a biotechnology company developing the proprietary Illuminox™ platform as a new standard in precision-targeted anti-cancer treatment technology, and also took up the role of CEO in 2018. 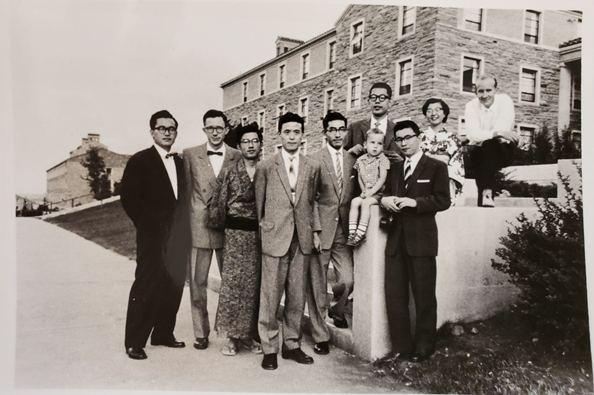 Ryoichi Mikitani (far left) during his time as a Fulbright Scholar 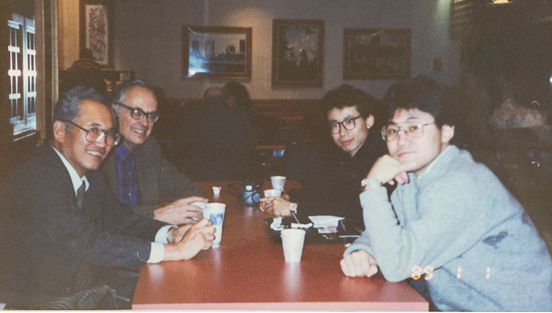