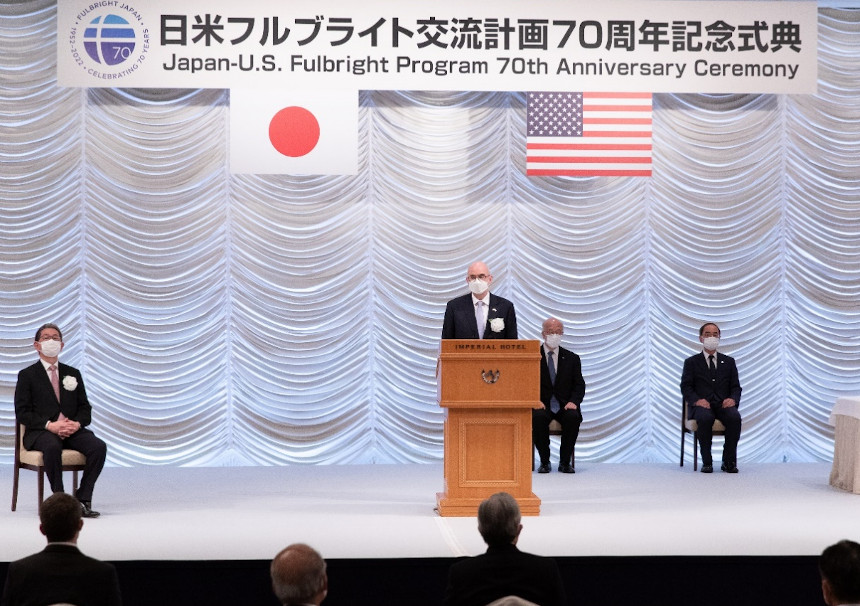 Tokyo – On July 1, the U.S. Embassy in Tokyo celebrated the 70th anniversary of the U.S.-Japan Fulbright exchange program at a special celebration that included Their Majesties the Emperor and Empress, U.S. Embassy to Japan Chargé d’Affaires Raymond Greene, Ministry of Foreign Affairs Vice Minister MORI Takeo, and MEXT Assistant Minister and Director-General for International Affairs OKAMURA Naoko. Founded in 1952, the Fulbright Japan exchange program is one of the most prestigious Fulbright programs in the world and includes 10,000 Japanese and American exchange alumni.

Over the decades, the Emperor and Empress have shown their support for U.S.-Japan education cooperation by attending each 10-year anniversary celebration. Also present at this year’s celebration were some of the private donors to the Fulbright Japan exchange program, among them Abitus President MIWA Toyoaki “Tony,” Seiko Watch President NAITO Akio, and Glen S. Fukushima who recently announced the largest single donation by a U.S. citizen to the U.S.-Japan Fulbright exchange program.

During his remarks at the anniversary event, Chargé d’Affaires Greene lauded the impact Fulbright has had on our nations and our peoples. He said, “The United States and Japan have never been closer, whether it is security cooperation through our Alliance, creating economic opportunities through our businesses, or advancing our shared values. All that we accomplish today has some root in the Fulbright Program, whose participants have contributed to the peace and prosperity that we champion in the Indo-Pacific and beyond.”

Co-Chair of the Fulbright Commission and Assistant Minister of the Ministry of Education, Culture, Sports, Science, and Technology OKAMURA Naoko said about the 70th anniversary, “In recent years, the international community has been facing numerous challenges, making Japan’s relationship with the United States even more important for global peace, security, and prosperity. We expect that the Fulbright Program will play an even greater role in fostering the leaders of the next generation in both our countries.”

Fulbright exchange alumni have made enormous contributions in their respective fields, and the relationships and collaborations that they create underpin the full range of U.S.-Japan ties. Japanese Fulbright alumni include four Nobel Prize winners, one Fields Medal winner, government ministers, and university presidents.