During an event hosted by NASA Administrator Bill Nelson and Deputy Administrator Pam Melroy at the agency’s Headquarters in Washington Friday, representatives from the United States and Japan gathered to sign an agreement that builds on a long history of collaboration in space exploration between the two nations. 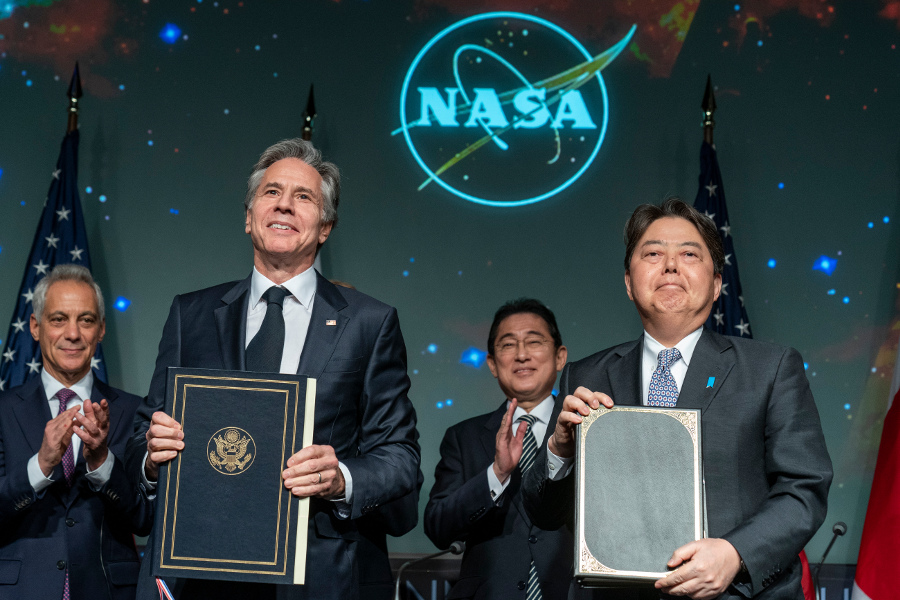 “The future of space is collaborative,” said Blinken. “Through this agreement, our nations have strengthened our partnership in space and here on Earth. We will go farther and learn even more together.”

The signing is a highlight of Prime Minister Kishida Fumio’s visit to Washington, his first since taking office in 2021.

“I expect this agreement to vigorously promote Japan-U.S. space cooperation and expand areas of cooperation for the Japan-U.S. alliance, which is stronger than ever before,” said Kishida.

“From low-Earth orbit to the Moon and beyond, Japan is one of NASA’s most significant international partners, and this latest framework agreement will allow us to further collaborate across our agencies’ broad portfolios in exploration, science, and research,” said Nelson.

Known as the “Framework Agreement Between the Government of Japan and the Government of the United States of America for Cooperation in Space Exploration and Use of Outer Space, Including the Moon and Other Celestial Bodies, For Peaceful Purposes,” this pact recognizes a mutual interest in peaceful exploration. It completes work from President Joe Biden’s May 2022 visit to Japan and the September 2022 visit to Tokyo of Vice President Kamala Harris, chair of the National Space Council.

Strengthening the space collaboration between the U.S. and Japan is a priority for both.

“This signing symbolizes not just the exploration of space, but also the partnership and the friendship between the United States and Japan,” said Emanuel. “This is a new beginning.”

The framework covers a broad swath of joint activities between the countries, including space science, Earth science, space operations and exploration, aeronautical science and technology, space technology, space transportation, safety and mission assurance, and much more.

“I hope that Japan-U.S. space cooperation will further deepen based on this agreement, as it will benefit the future of humanity,” said Hayashi.

NASA and the Government of Japan finalized a previous agreement in November 2022 confirming Japan’s contributions to Gateway as part of a commitment to long-term lunar exploration cooperation with NASA under the Artemis program. Japan also was one of the original signatories of the Artemis Accords.

More photos from the event are available online here.