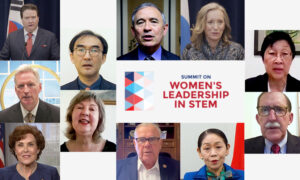 A four-day virtual summit featuring participants and panelists from the United States, Japan, and South Korea, tackled this issue head-on. Participants from all three countries discussed how to amplify the vital role women play in advancing global STEM initiatives, how to create support networks, and how to overcome social norms that hold women back.

The second Summit on Women’s Leadership in STEM, a State Department-sponsored program administered by The Asia Foundation, brought together nearly 50 experts from government, the private sector, and civil society to examine ways to work together to remove barriers to women’s participation in STEM industries. These experts engaged in conversation and networking with the nearly 500 registered participants.

In a pre-recorded message broadcast on the opening day of the summit, Charge d’Affaires Joe Young of the U.S. Embassy in Tokyo talked about the importance of developing an environment that nurtures success, including a culture of diversity and inclusion. Ambassador Harry Harris, the U.S. Ambassador to the Republic of Korea, also participated via video message.

During her opening keynote remarks, Ambassador Kelley E. Currie, Ambassador-at-Large for Global Women’s Issues, emphasized that our three governments are committed to promoting more opportunities for women in STEM “in order to improve the overall equity and competitiveness of our economies.” Ambassador Atsuko Nishimura, Japan’s Ambassador in Charge of Women’s Issues, tied the importance of science and technology to the ongoing challenge of dealing with COVID-19.

The Summit on Women’s Leadership in STEM is part of Mission Japan’s ongoing efforts to increase interest in STEM fields among young girls through mentoring, leadership development, and hands-on experience.