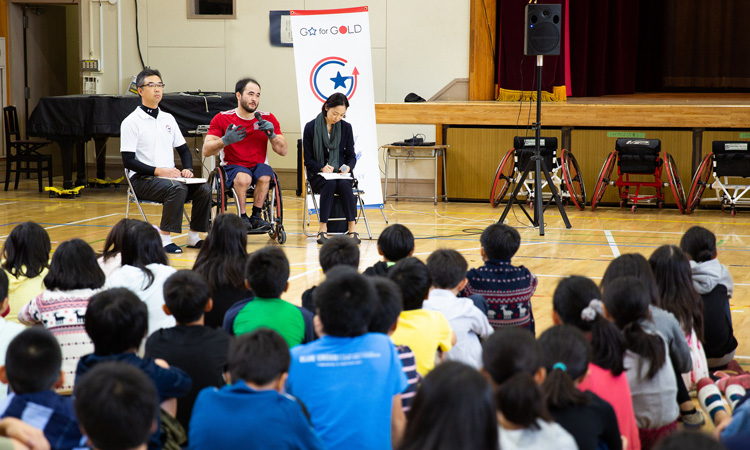 On October 17, two-time Paralympic Wheelchair Rugby medalist Chuck Aoki met with more than 100 sixth graders at Futako-Tamagawa Elementary School in Setagaya Ward. The visit was part of the Embassy’s “Go for Gold” campaign to build stronger understanding between the United States and Japan ahead of the 2020 Tokyo Olympics and Paralympics.

Aoki shared his childhood experiences of how he overcame many challenges. He explained what it was like becoming a Paralympic athlete and how he is preparing for the Tokyo 2020 Paralympic Games, all while working on his Ph.D. in international relations.

After his talk session, Aoki demonstrated his rugby moves, and he helped the students see a new perspective by giving them a chance to try out some sports wheelchairs for themselves during the activities.

Aoki and USA Wheelchair Rugby were in Tokyo to compete in the 2019 Wheelchair Rugby Challenge. The American team went on to claim the championship, defeating top-ranked Australia 59-51 in the final on October 20. A record 35,700 people attended the wheelchair rugby matches during the challenge, the highest ever for a para team sports event in Japan.